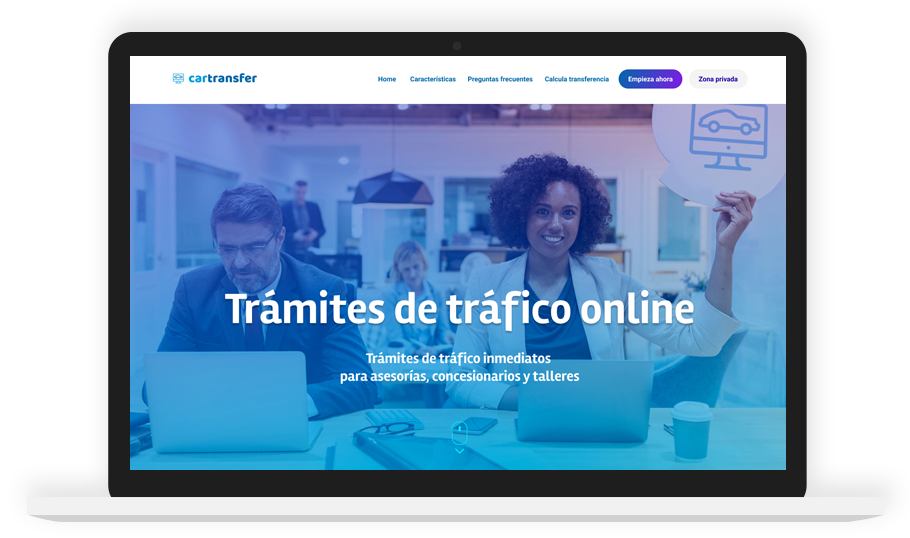 This is the perfect example of process digitization of a service that evolves from analog to digital mode. It took analysis and a lot of courage in the face of an ambitious investment of time and resources. Today they have an efficient platform that will transform investment into profit.

The client had already been providing vehicle services to dealers, workshops and consultancies for years and like many companies, they managed everything by email and by phone.

They decided to take a step and create a platform where they would offer the same service but digitally and therefore unify and optimize the entire process in order to improve the way they work and be able to attend to a greater number of requests from their clients.

We sat down with them to understand the required functionalities and the types of users who would use this platform.

Finally, we set up a private area for professionals (end users) and an administration panel for managers.

And also, we create the corporate identity and set up its presentation website through which attract new clients interested in using the platform.

We also created a series of internal tools that add value to users, such as being able to consult the Dirección General de Tráfico database live and being able to calculate the transmission tax (ITP).

Below we highlight some of the sections that we developed as part of the project.

An online statistics and management project requires the highest level of visual production and clarity of language, to reflect the sophistication of the functionalities of the application developed.

One of the fundamental points was to develop a friendly and trendy identity, which transmits the same simplicity with which the processes it offers are carried out.

Responsive is the cornerstone of our digital design procedure.

Identity, colors, infographics, everything requires coherence and unity. The content must be communicated with elegance and clarity.

How to distinguish a company over hundreds of similar competitors? With an amazing design and interface. The end user accesses a clean dashboard through which they can use the main functionalities for creating procedures as well as being able to create budgets for them and customize the entire aspect with the logo and data of your company.

The menu provides access to other complementary tools, such as calculating the ITP tax or viewing your invoices. One of the main concerns of the client and challenges of the project was to see if we could bring to the application the entire database of the Dirección General de Tráfico composed of millions of records of transfers, registrations and vehicle casualties.

The DGT gave you the possibility to manually request through its website, a free simple report on a vehicle by its chassis number, or a complete paid report.

But they also gave you free access to their historical data, only that it was practically impossible to consult easily, because the data was stored in monthly text files with hundreds of thousands of records.

They did not have an API that would have been easy to integrate into a web application to be able to consult that data live.

The challenge then consisted of setting up a system capable of downloading and processing these raw files and placing all the records in a database and being able to update and monitor its integrity constantly.

With this requirement in mind, we opted to create two databases in the project:

The final result obtained was a proprietary database of more than 30 million records that allows instant queries by chassis number. Another tool that the client wanted to develop to add more value to the users was to create a calculator for transmission tax.

The algorithm of the calculator is based on official data published in the BOE that contains the rates for the different makes and models of vehicles and also contains different exceptions depending on the region of the buyer.

This tool integrates with the application in 3 ways:

The tool, in addition to being used by registered users, is also on the website, open to free public use: Management of procedures through ticket system

We have done brainstorming to think about how the platform managers will process the procedures in the most optimized way.

We reached the conclusion that the most optimal would be to set up an interface similar to a tickets / helpdesk system.

Therefore, when a procedure is sent to the manager, it becomes a ticket, which generates notifications by email and allows comments and status changes, in this way there is direct communication between the manager and the professional.

The system incorporates other components in the same interface that enrich it and make it meet the business requirements, such as:

One of the things that made the paperwork process tedious was having to manually fill in different models of documents that those interested in the process had to sign. For example, a sales contract, a statement, or even official DGT forms.

What we did was create a system that uses several PDF templates already defined and fills them in automatically from the information that had to be entered only once in the procedure form.

In other words, by filling in the fields, the platform generates 8 different document models already filled in and therefore saves time in management.

Given that the procedures would be done through the platform, it was also important to set up a payment system through an online credit card payment gateway.

So we have built a small e-commerce experience within the platform that allows: generating orders, paying by card and issuing invoices and confirmation notices by mail.

We set up this system so that it can work both from the private area for the payment of procedures by logged in users, as well as it was made available for unregistered users so that other services can be sold to anonymous users from the website and take advantage of the same order engine.

It can be tested by requesting an Official DGT Report from the website that goes through the same ordering engine:

We have thought about who will use the platform more intensively and we came to the conclusion that those users will be the managers who will receive and process the procedures.

For this reason, we strived to design the best possible user experience so that a manager can easily locate and manage their procedures.

The aspect is that of a ticket system, similar to the Github Issues, which allows the manager to filter or sort the procedures by different fields, as well as see the most relevant information in the list.

As technology specialists, in our day to day we use tools such as Github, Stackoverflow, Figma and with their use we identify usability patterns that we take into account when creating the different interfaces of an application so that the final result is more intuitive for the human eye .

For the administrators of Car Transfer we have built a management back office from which to supervise and parameterize the entire platform.

This backoffice allows you to perform many actions, such as:

The AviationJobs Web App is one of the most visited job boards in the aeronautical area. We have implemented both the backend, with all the functionalities and infrastructure and also the look & feel.

Need help with your project?